There has been the talk of initiation of new anti-dumping investigations concerning the coated paper import from China, USA, and EU to India. The countries which are exempt from this investigation are South Korea and Indonesia – countries which are claimed to be responsible for cheap imports into India due to their Zero Custom Duty status as pointed out by the Chairman of Ballarpur Industries Ltd. (BILT) in the company’s 2016 & 2017 Annual report.

The manufacturers in the USA and EU have operational costs which are higher and capital investments in coated paper plants compared to their counterparts in India. The quality that is produced in the USA and EU is considered higher than the coated paper manufactured both in China and India. Mostly, paper from the USA and EU are utilized for jobs that require consistent high-quality printing, which may not give the same printability results as the paper produced in China and India.

Near Aggarwal, Chief Operating Officer of BILT Paper B.V. said, “In a county which produces about 12 million tonnes of paper per annum, the per capita consumption is abysmally low at 10 kg per person as against the world average of 55 kg per person. However, this is poised to see big growth with domestic capacity heading towards 20 million tonnes.” [1]

The decline in Paper Import from China to India

It has been agreed by experts that over the last few years the Chinese manufacturers and exporters have been dumping paper in India at prices 15-20% lower than the rest of the world both in desperation of shifting the quantities they are producing, which their own country is not able to consume, and also in order to capture a larger share of the Indian coated paper industry. However, later in 2017, in an attempt to control the pollution levels, China has taken an extremely strict approach towards industries who are contributors to the high pollution levels, including the paper industries, and it has been said that they are not taking the required measures to produce paper in an environmentally friendly way. This movement by the Chinese government has seen a decline in coated paper import from China to India and a price increase to over 15% since October 2017.

Paper companies are already under pressure amid rising input costs and is now having to tackle the problem of dumping of cheaper paper import from China and Indonesia, according to paper industry players.

“This is causing big concern for the domestic manufacturers, who are unable to meet the lower costs offered for the imported paper. Therefore, we have requested the Centre to impose an anti-dumping duty and hope a favorable decision is taken soon.”[2]

Demand for wood supply in India

The paper industry generally places a high demand on natural resources such as water and trees used in manufacturing which is already scarce in India. As per BILT’s own acceptance, “India is a wood-fiber deficient country. Inadequate domestic supply of raw material is a major constraint for the Indian pulp and paper industry.” The situation is so grim that BILT had to keep one of its units in service at minimal production in FY2017 due to a shortage of raw material and working capital. In order to have a better understanding of the situation, one needs to look at the estimates made by BILT itself. Of the present demand of 11 million MTPA, India is already importing 2 million MTPA of wood to be used by the paper industry, this demand is expected to go up to 15 million MTPA. The competition in India lies in whether water can be purified for drinking purposes or if it should be pumped to a paper manufacturer to run their machines.

MBS Nair of Emami Paper says, “The percentage of waste paper to produce paper has gone up from mere 20 percent to 35 percent over the last few years and we expect this trend to continue on a larger base.”[3]

Imports vs Exports for the Indian market is a major concern for local paper mills across India.

India is emerging as a growing market for paper. Saurabh Bangur, President, IPMA, said, “Though India is one of the few growing markets for paper, most of the growth in demand is being met by imported paper while domestic capacities are lying under-utilized. Indian paper industry has invested $2-3 billion in the last decades and we are game to ramping up the production further. What is hampering the expansion of the domestic industry is the imports. If the preferential treatment to imports can be done away with, the Indian paper industry can grow and contribute further to the growth of rural economy” [4]

“Unbridled growth in import of paper is hurting the domestic paper industry and the country. The industry does not enjoy a level playing field vis-à-vis duty-free imports from countries where the cost of production of paper is a fraction of cost in India as raw material, inputs and energy is much cheaper and easily accessible,”

says IPMA, in a communique to the ministry of commerce & industry. [5] 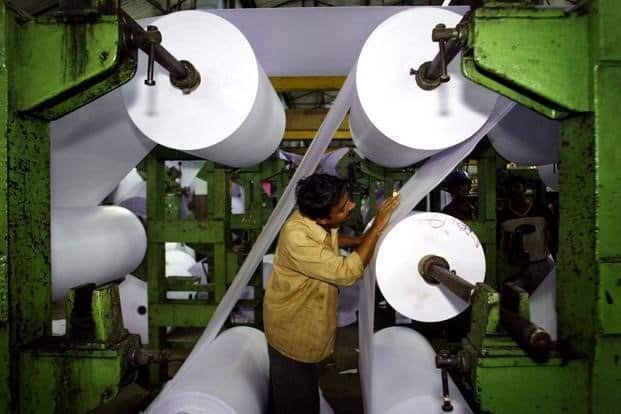 Poonam Gupta, the CEO of PG Paper Company which is a leading paper distributor in the Indian Sub-Continent, stated: “It seems unfair to punish the manufactures by imposing a further levy on top of the 10 percent import duty that is already in place on coated papers. Lightweight coated paper is currently not manufactured in India at all and is no threat to the local manufacturing industry,”

To lead the fight against this cause, Poonam has written to the Finance Minister of India, Arun Jaitely, and Commerce and Industry Minister of India, Suresh Prabhu, requesting not to impose any restrictive duty on the imports of coated paper from the US and Europe.